Difference between revisions of "Codesign resources for human rights documentation"

This page is for you if you've ever thought "We're wondering why our tools aren't being used, or (hopefully) we're about to build one and we want to increase the likelihood that it will be useful to the end users."

"Solution": As much as there's ever a "solution" to anything, there is an entire field of study and practice around participatory design, which not only sets your tool to be closer to what the end users actually need and want, but also increases their ownership of the process and end product. And who doesn't love more social justice in with their methods?

Participatory design is often considered expensive because it involves bringing designers and developers into the situation for which they're building. However, is this more or less expensive than building a tool which won't be used? 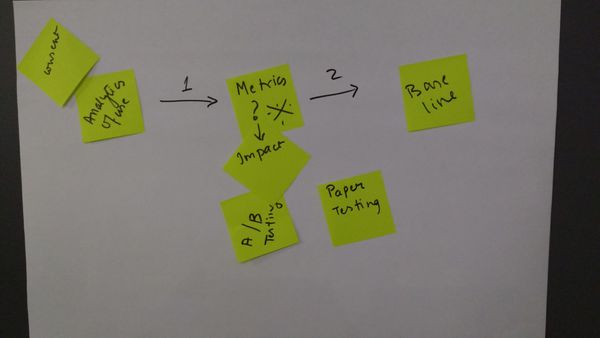 In the commercial sector, market research, A/B testing, etc is considered standard. It doesn't guarantee success, but it does increase the likelihood. In the commercial sector, money and views/clicks are how success of a tool can be judged. While the first hurdle is often just getting people to your platform/tool, the next questions about where usability is falling down can be broken in to "buckets". This is called bucket funneling. An example would be Amazon with a cart and things to buy, you break out the process into buckets and see what happens in each bucket, and what is preventing people from doing what we want in each bucket?

This assumes LOTS of users, computational power, resources. It also assumes an extractive mindset -- the business/organization has determined what they want you doing, and are optimizing for you following a path to that outcome.

This doesn't work when we care about privacy (we're not using cookies to track every click, time spent on a thing, etc). We also care about consent. What if we can't assume we know what people want (in a new field or with a new population), nor do we want to impose our view on them? We are working for overall justice and equality, not optimizing for clicks. We tend to care more about people being empowered more than us being right. Metrics for us are more difficult. It's not just about clicks or money. Impact is so nebulous and difficult to measure. We often frame our success instead as outcomes tracking impact. Outputs are tangible things (workshops, downloads, etc) but (hopefully) lead to outcomes. So how can we involve our end users in our process?

Who owns the tool and process? In codesign, it's the end users who feel obligation and passion in seeing it succeed. Also creators should be making ourselves obsolete.

Been able to compensate people before, been able to colocate with people. Difference between a survey and codesign is that.

There are some resources out there, but people get phds in this, so it can seem difficult to make it happen on your own.

How to first find your groups to work with

Core misunderstandings about what is true in a place (and that people don't know what to tell you about, because it's their lived experience).

How much time you have -- if you have an hour-long workshop, the first 45 minutes will be installing a thing

Have to close feedback loops -- respond to feedback, let people know they're heard, why something was dropped.

Do people have time to give you feedback? Build in time to iterate with people, workshop trainings as bug hunting as well. Then have people you've worked to train, train someone else.

Documenting some use cases and making a meta documentation. Format -- PDFs don't do well (but can be so pretty!)